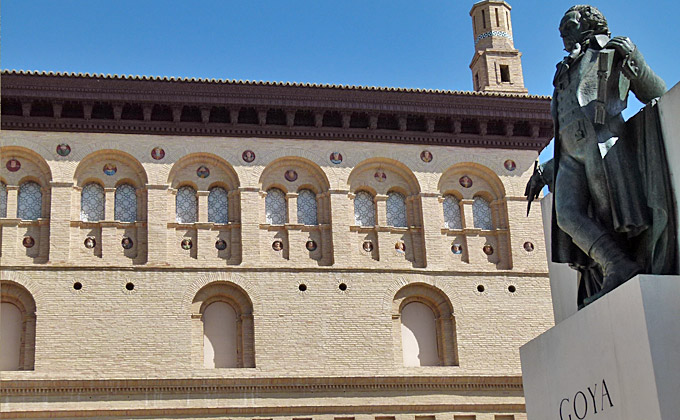 If you are looking to visit the most important monuments of the city, this tour showcases old Zaragoza where we will talk about the more than 2000 years of history from the first settlements to the present day. We adapt to any schedule and also offer extra services such as hotel pick-up, food recommendations or special events. All kinds of tours are available for small and large groups, accompanied by guides, both inside the city or within the autonomous region of Aragon.

We begin at the Roman walls, which were originally the limits of the Roman city known as Caesaraugusta when the city bore the name of the Emperor Augustus. The city was founded in 14 BC by Roman legions, we will explain this period and relate it to the statue of Augustus of Prima Porta.

We will enter the Plaza del Pilar where some of the most significant monuments of the city can be found, such as the Hispanic Fountain, the Basilica of El Pilar, the Town Hall, the Lonja and the monument to Goya.

We will continue through the Plaza de la Seo, the old centre of the Roman city – where its ruins are located – and origin of the first temples such as the Muslim mosque, and today the Cathedral of the Seo.

We will go up the street called Don Jaime, which in the past was a Roman road, to visit El Tubo (the most famous tapas area in Zaragoza) and learn about its history, as well as getting to know some of the city’s more charming squares such as the Plaza de San Felipe with its church, the Pablo Gargallo Museum and the New Tower. We’ll finish in the Plaza del Justicia with its spectacular facade of Santa Isabel de Portugal. These and many more stories can be found in our guided tour of Zaragoza. More info in personalized visits.